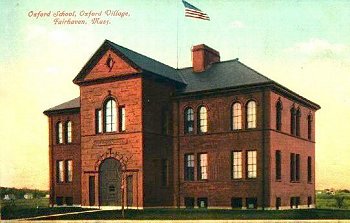 Until the 1890s, the northern part of Fairhaven was sparsely populated, with much of the land used for agriculture. Students attended classes at two small district schools the Royal Hathaway School, also called the “Pink”‘ schoolhouse, and the Oxford Village School, a stone schoolhouse which still stands on North Street After the Coggeshall Street Bridge was built in 1892, many millworking families settled in North Fairhaven. As more homes were built and the population grew, the tiny schoolhouses overtlowed. Many children were carted across town in a horse drawn ‘barge” to attend class at RogersSchool.

In June of 1896, the Town signed a contract with Brownell & Murkland of New Bedford to build a new Oxford School for $12,340. The two story, brick building had just four classrooms – two on each floor with front and rear staircases and central halls. The roof was slated and over the front portico the words OXFORD SCHOOL were mounted in red terra cotta. Oxford was the first large elementary school built with town tax money, the earlier Rogers School having been a gift.
Construction was finished at the end of October 1896, and students moved in in early November. Dedication ceremonies for the new school, featuring music, prayer and speeches, were held at the Town hall, presided over by Superintendent of Schools E. B Gray. Teachers during the first year were Kate Drew, grades I &2; Grace Nickerson, 3&4; and Mary Donovan, 4, 5 & 6.

By 1914, even after the opening of a Catholic School in North Fairhaven, the Oxford School’s four rooms were filled to capacity. The Town, therefore, spent $30,000 to add four more classrooms to the rear of the building. At that time the Revere bell was removed from Phoenix Hall and installed in Oxford’s new cupola. This second phase of construction completed what is now known at the “old building,” which served well until 1951 when a $376,204 contract was awarded to Sullivan-Foster Inc. for another addition. Only shortly before this newer wing was added, the school saw its first male teacher, David Cargill, who taught a year at Oxford School in 1949-50, then later taught math at Fairhaven High School.

In the 1970s a portable classroom was installed behind the school when kindergarten classes were begun.

Now one-hundred years after its first classrooms were built, the venerable Oxford School still serves the children of Fairhaven well.

Back to the Library

Back to the Fairhaven Page