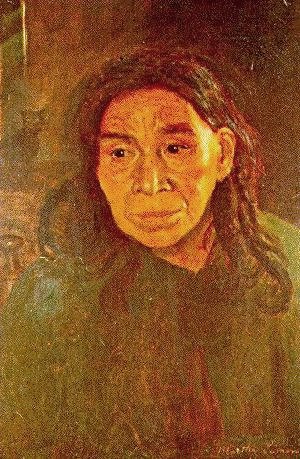 Last of the Narragansetts

Martha Simon was the last of the Native Americans in Fairhaven. She was a Wampanoag, despite the title of the painting, “The Last of the Narragansetts.” This painting is by Albert Bierstadt—a departure for him from the panoramic landscapes of the West for which he is best known. He presented the painting to Henry Huttleston Rogers, in the hopes of currying favor as inventor of a device for a railway car (Henry Rogers owned a railroad,) although in the letter accompanying the painting, Bierstadt says “I cannot afford to waste my time making money.” Not much is known about Martha except from Thoreau’s visit. Here is the excerpt from the journal of Henry David Thoreau, dated June 26, 1856. He was visiting his friend Daniel Ricketson in New Bedford.

Heard of and sought out, the hut of Martha Simons, the only pure-blooded Indian left about New Bedford. She lives alone on the narrowest point of the Neck, near the shore in sight of New Bedford. Her hut stands some twenty-five rods from the road on a small tract of Indian land, now wholly hers. It was formerly exchanged by a white man for some better land, then occupied by Indians, at Westport, which he wanted. So said a Quaker minister, her neighbor. The squaw was not at home when we first called. It was a little hut not so big as mine. No garden; only some lettuce amid the thin grass in front, and a great white pile of clam and quahog shells on one side. She ere long came in from the seaside, and we called again. We knocked and walked in, and she asked us to sit down. She had half an acre of the real tawny Indian face, broad with high cheek-bones, black eyes, and straight hair, originally black but now a little gray, parted in the middle. Her hands were several shades darker han her face. She had a peculiarly vacant expression, perhaps characteristic of the Indian, and answered our questions listlessly, without being interested or implicated, mostly in monosyllables, as if hardly present there. To judge from her physiognomy, she might have been King Philip’s own daughter. Yet she could not speak a word of Indian, and knew nothing of her race. Said she had lived with the whites, gone out to service when seven years old. Had lived part of her life at Squaw Betty’s Neck, Assawampsett Pond. Did she know Sampson’s? She’d ought to; she’d done work enough there. She said she was sixty years old, but was probably nearer seventy. She sat with her elbows on her knees and her face in her hands and that peculiar vacant stare, perhaps looking out the window between us, not repelling us in the least, but perfectly indifferent to our presence.

She was born on that spot. Her grandfather also lived on the same spot, though not in the same house. He was the last of her race who could speak Indian. She had heard him pray in Indian, but could only understand “Jesus Christ.” Her only companion was a miserable tortoise-shell kitten which took no notice of us [notice the cat behind Martha Simon in the painting]. She had a stone chimney, a small cooking-stove with fore legs, set up on bricks within it, and a bed covered with dirty bed-clothes. Said she hired out her field as pasture; better for her than to cultivate. There were two young heifers in it. The question she answered with most interest was, “What do you call that plant?”and I reached her the aletris from my hat. She took it, looked at it a moment, and said, “That’s husk-root. It’s good to put into bitters for a weak stomach.” The last year’s light-colored and withered leaves surround the present green star like a husk. This must be the origin of the name. Its root is described as intensely bitter. I ought to have had my hat full of plants.

A conceited old Quaker minister, her neighbor, told me with a sanctified air, “I think that the Indians were human beings; dost thee not think so?” he only convinced me of his doubt and narrowness.